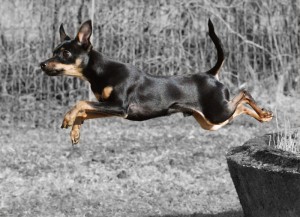 Primo is our first puppy from our own breeding. He was born june 27, 2011.
He is growning nicely, very promising boy indeed. 🙂
At his very first puppy show, the judge wrote “Champion Quality” in the comments. That made me so happy!!

At the MyDog INT show (puppy class), the judge immediately said “what a nice puppy!” when we entered the ring, and the he got a super critique. But best of all, in this super intense environment, he behaved like a PRO!

At his very first official show he got CAC and won BOB!!
After that he was shown sparingly, but was still #4 Prazsky Krysarik in 2012, (#3 dog), he has won 7 CAC including the one at Tvååker 2013 where he became Swedish Champion only 2 years and 2 weeks old! =) 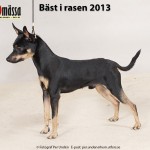 In 2013 he also tested in BPH (mentality test) with excellent result! He also won BOB at the Swedish Winner show 2013 in tough competition (24 krysariks), and ended up as #3 PK of the year!
In 2014 he was shown at the Norwegian Winner show where he was Best of Breed!
He also sired his first litter at Kennel Håfveleds, 2 gorgeous girls and 1 handsome boy. 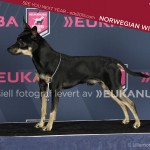