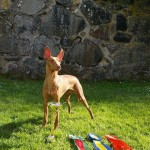 Keiron is the sweetest boy ever, he is so gentle and loves to cuddle. He carries the most resemblance to Keios of all the puppies in the litter. He also has the best angulations and is very proportional. Great stride with super flexion!

Already as a junior he won several CAC, he is Junior Champion of Spain, Danish Junior Winner 2013 and in intermediate class he placed in BIS at a Specialty Show. He was best male at Skokloster Summer Show 2013 and he was the first in his litter to finnish the Swedish and Nordic Championship!

In june 2015, Keiron became father to a lovely litter of 4 girls and a boy at kennel Bellocean’s.
But only days later, our tears of joy changed to tears of extreme sorrow… Keiron died in a terrible accident. The sweetest Cirneco of all, loved by every person he met, was too missed by the angels in heaven – and he was called home. With him he took big pieces of our hearts. <3 Even though we are grateful that his babies are doing really well, we still mourn the loss, and our thoughts are with his family Britzyk, Daniel and their other dogs. <3
Rest in peace Keiron, you will NEVER ever be forgotten! <3 <3 <3