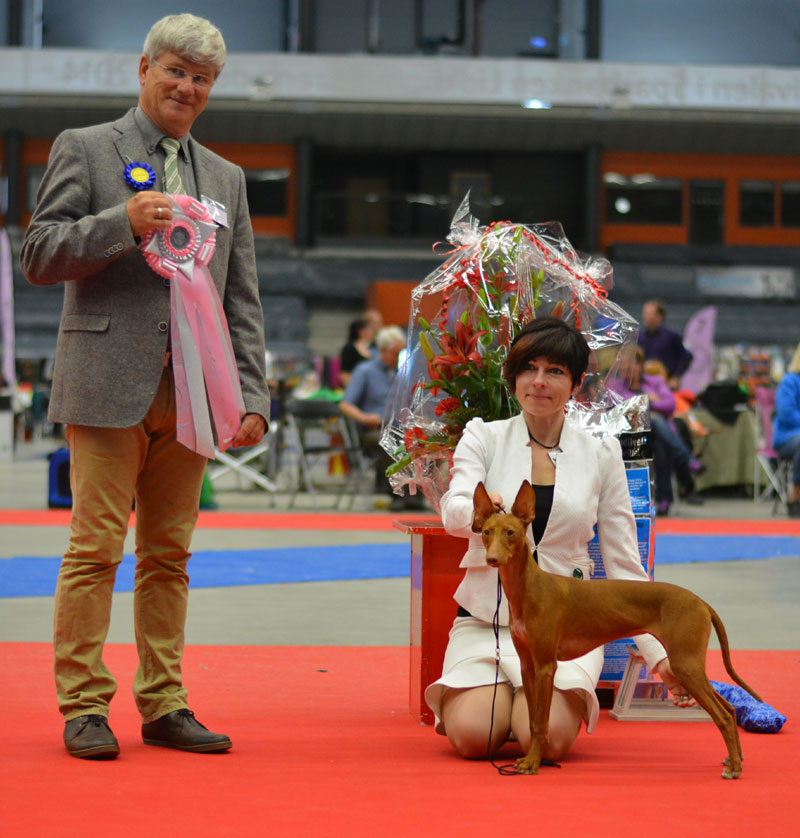 OMG! What a weekend!
On Saturday I went to Lidköping NAT All Breed KC Show.
I almost missed the judging because of change of judges and a miscalculation on my behalf.
Came to the ring in sweat pants and asked what breed was about to be started. The ring steward said “We are just about to start with the Cirnechi  now!”. When she saw the look on my face, she added “…in 2-3 minutes..?”
So I ran to the cages and threw my outfit on, got the dogs in leashes and treats in the pocket, and jumped into the ring. 😀

I showed Bacon who got excellent critique, and then Tesla. In BOB/BOS puppy, Daniel helped me with Bacon.
The judge loved them both, but preferred Tesla! So, Tesla BOB-puppy and Bacon BOS. 🙂

Then it was time for Loki (there was another adult Cirneco entered, but we waited and no one could find or see them, so Loki’s class was called to the ring).
Loki behaved excellent as usual and got the CC and by that also CAC and BOB.

Finals:
Tesla first out in the puppy BIS finals.
I really didn’t think we stood a chance, because there were LOTS of nice puppies, between 30-40 pups. And Tesla was very “up and down”, one minute happy and playful, the next a bit anxious. But the judge liked her well enough for a shortlisting to a top-10, so I thought that was a great accomplishment. I was really sure the Basenji puppy was the one that would win, it moved and behaved like a pro.
We all had our puppies looked at once more, and then the placing started. I had a tiny hope for a placement, but when they placed the 4th, 3rd and then 2nd. With the Basenji still left to place (in my mind it was the winner) , so imagine my total surprise and chock, when they called for Cirneco dell Etna as Best in Show-puppy!! 😀 😀 😀
Wohooo!! Our little Tesla DID IT! 😀 So now we actually have TWO puppies qualified for Puppy of the Year!!

But wait, it doesn’t stop there: In the group, Loki was amazing, and trotted himself to first a shortlisting, and then GROUP 4!! 😀
CRAZY amazing day!!!! Woop wooop!!!

And on sunday, the Lex Murphy-success continued… (read about Sunday here)