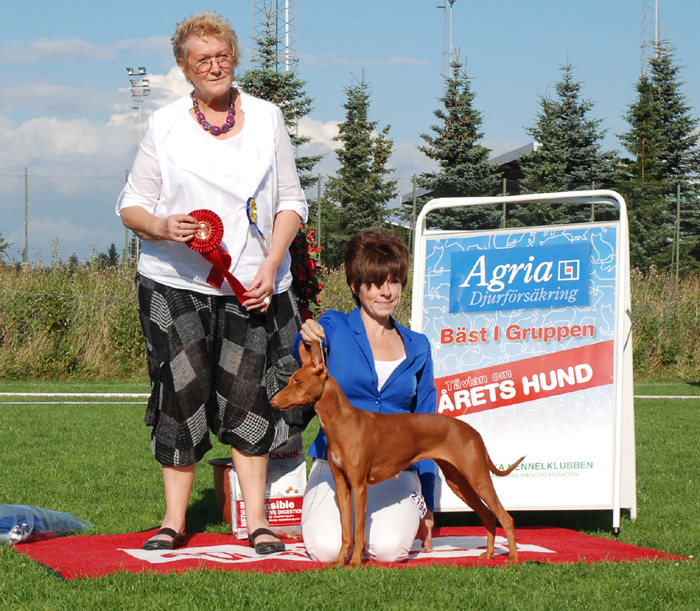 OMG! What can I say?! I am soooooo happy and PROUD of our amazing Lava, that once AGAIN wins the group at an ALL BREED show!!

After the breed judging, I actually was quite confident that we at least could have a chance for a shortlisting, because of the super critique from the judge, who also was supposed to judge the group. But when it was time for the finals, there was a change of judges due to flight times, so then we didn’t know how it would end at all. I have never shown for Mrs Whitmarsh before, but I have to say that during pre-judging, she was one of the nicest judges I’ve seen. She really took the time to look at every dog, and she also talked wery friendly with some of the owners who never seemed to have been in a final, explaining to them what to do. Very nice!

After running the first lap, we stacked and the judge started to pick out dogs. And to my happiness and suprice, she picked Lava!! And she didn’t shortlist, she just picked 4 dogs: Lava, the Keeshond, the Husky and the Swedish Vallhund (Västgötaspets, actually it was the same one as in Backamo, who was placed 3rd then: Skogsbygdens Nora Supernova. A top winning dog that has won many BIS and also was Dog of the Year in Sweden a few years ago.) So, competition seemed tough, but as we were only four, I was so happy to get a placing in the group!

And then we ran again, top 4! And suddenly it was time for the placings. To fourth place, they called for the Husky, and third place went to the Keeshond. And after a looong wait, they finally called to Best of Group: THE CIRNECO!! Yipppiiie!!! 😀 😀 😀

Almost exactly 1 year after her last group win, and only 14 weeks (!!!) after having her first litter, the amazing LAVA did it again!

The judge had us running an extra lap for the win, and so we did. And then we stacked for the photos.

After a very short wait it was time for the Best in Show-final. The judging was extremely quick, we all ran one lap, then the judge looked at the dogs and we got to run a few steps up and down, and then it was over. Many nice top winning dogs in the BIS, but not the expected winners.
We didn’t place in the BIS, but maybe, just maaaybe, we can make it some day in the future… 😉

THANK YOU judges and friends!! <3